Vending Machines of the Future 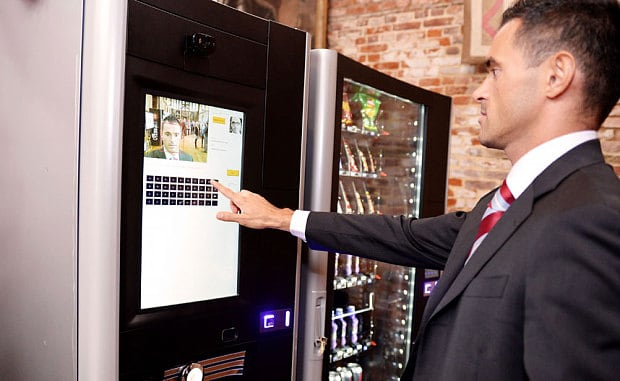 The vending machine of the future is here, and it knows who you are

The world’s first vending machine with facial recognition technology has been unveiled, and it could refuse to vend a certain product based on a shopper’s age, medical record or dietary requirements. For example, a school can link the with its database and tell the machine to refuse to sell certain products, such as cigarettes, to underage students or a hospital could prevent a user with health conditions such as diabetes buying a sugary product.

It’s called the Luce x2 Touch TV and it’s the world first vending machine with a dynamic interface, on-line services and face recognition technology. The LCD 22″ touch-screen monitor immediately captures the attention of passers-by. The latest face recognition software means the machine will greet the user personally and offer to reproduce previously made custom beverages. In other words, you could buy a drink from a machine in Manchester and get recognised by a Luce X2 in London and have it produce the same drink, while this is a scary thought that comes with a few privacy concerns, the machine’s capabilities have many real-world benefits, the Luce X2 could lead the way for vending innovation.

This is a mock up of what the interface inside the machine may look like, it will be able to tell you your favourite purchases and offer to reporoduce them even if you are on a different machine in a different city.