Craziest Vending Machines in the World 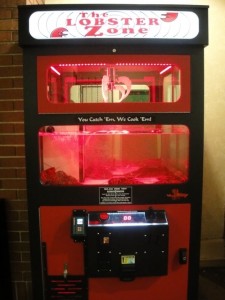 Vending machines have become an unsuspected growing sector as other markets have begun to realise the potential of these machines. Being able to sell your product, using an automated machine, defeating the need to employ staff, saving businesses money and increasing their demographics. A lot easier to place a vending machine than to build an outlet!
Here are some of the most unique uses of vending machines we here at Apple Vendinghave witnessed:
The mashed potato vending machine:
Created by 7-11, the mashed potato vending machine dispenses powdered mashed potato with a helping of Maggi’s famous seasoning sauce. The machine is quite simple to use, you simply place the cup under the spout, similar to a hot drinks vending machine, press the ‘Mashed Potato’ button and wait for the powdered mash to fill your cup! The machine also appears to offer a ‘BBQ Mashed Potato’ option as well.
Baguette vending machine in Paris:
Apparently the French’s love of fresh baguettes is not a stereotype! Paris have installed their own baguette vending in the city. The dough is partially cooked before being placed in the vending machine, and is then baked as per order.
Canned bread vending machine:
I initially though this was a joke after seeing some canned bread in an episode of SpongeBob SquarePants but obviously there is a high demand for canned bread in Japan. The bread comes in a variety of flavours such as; fruit, coffee and chocolate chip and have an artistic design on the packaging, for $4, it wouldn’t be my choice however.
The lobster zone:
Although no longer in use, this bizarre machine deserves a mention. Ticnoo’s Bistro in Las Vegas was home to a live lobster claw machine, where for $2 you could catch your dinner. However, if you were lucky enough to win, the lobster was free!
Draft Beer Vending Machines:
Cold drinks machines have become common place in a lot of places such as workplaces, gyms, shopping centres etc but Japan took it to a new level with the Draft Beer Vending Machine. Whilst on the face of it, this appears to be an excellent idea, it will put you back $12 a pint.
Cannabis Vending Machines:
***disclaimer! Apple Vending does NOT condone the use of illegal drugs***
Since America’s increase in states either legalising or allowing medicinal use of, people have become more creative in how to make business out of this. As well as the stores and coffee shops you would expect, cultivators have began using vending machines to distribute their products for both recreational and medicinal use. This really does show the diversity of product vending and how it can be applied in so many wacky and useful ways.